On 30 November, the US government celebrated the tenth anniversary of becoming a signatory of IATI. The US State Department and USAID marked the occasion, by launching their newly consolidated transparency portal: ForeignAssistance.gov.

The US Department of State published the following:

"Today, the United States celebrates the tenth anniversary of becoming a signatory to the International Aid Transparency Initiative (IATI), marking a sustained, whole-of-government commitment to increasing the transparency of U.S. foreign assistance data. Additionally, as part of this broader commitment, the U.S. government launched a new platform to advance the transparency, accessibility, and accountability of U.S. foreign assistance data, available at ForeignAssistance.gov.

By publishing U.S. foreign assistance data that is accurate and timely, ForeignAssistance.gov presents a multi-dimensional picture of the U.S. foreign assistance lifecycle in a highly visual, interactive website. ForeignAssistance.gov publishes data as reported by more than 20 U.S. government agencies that manage foreign assistance programs. In doing so, the website fulfills aid transparency standards and reporting requirements, including the Foreign Aid Transparency and Accountability Act of 2016 (FATAA), Foundations for Evidence-Based Policymaking Act, and Office of Management and Budget (OMB) Bulletin 12-01. ForeignAssistance.gov is a product of the Foreign Assistance Data and Reporting Team (FA-DART), a joint initiative by the Department of State and U.S. Agency for International Development (USAID); it replaces two legacy websites, previously managed under separate mandates.

IATI is a global, voluntary, multi-stakeholder initiative that includes donors, partner countries, civil society organizations, and private enterprises that aims to make information about foreign aid spending easier to access, use, and understand. At the center of IATI is the IATI Standard, a framework for publishing data on development activities. The United States is proud to have been an active member of the IATI community for the past decade and remains committed to continuing to improve foreign assistance data transparency to increase learning, improve outcomes, better use resources, and remain accountable to the American public." 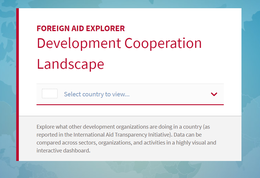 USAID has launched Development Cooperation Landscape, a public portal aimed to enable their staff and other users to access IATI data on the spending and activities of other development organisations.
Read more 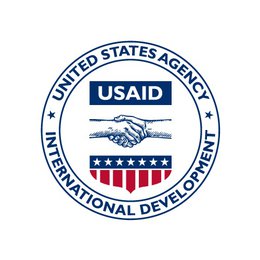 USAID: The value of transparent data in humanitarian crises